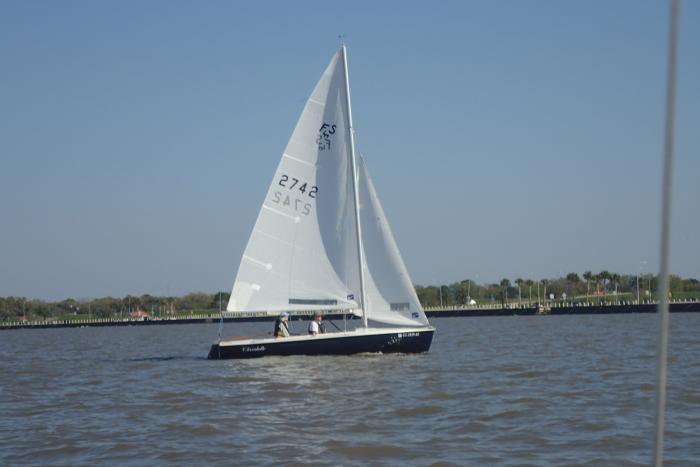 Brrrrr, it sure was chilly in the morning!  But we got warmed up with beignets and coffee from the famous Café du Monde.  It was 48 degrees but felt like 39 with the wind chill, even with the sun poking through the clouds.  After polling the competitors, it was decided to postpose until 1PM.  When we left the dock, it had reached the 50’s with the wind at 8-10 directly from the north.  We were cold going out, but worked hard enough on the water and managed to stay warm – and luckily the sun stayed with us the whole time.

Once again the Race Committee got Race 1 started right at 1PM with a 4-leg windward-leeward with .7 mile legs.  You could almost see the lead change every time a boat tacked and realized it was a mistake.  Some of us managed to get it right and stay in the pressure but some boats went from the beginning of the fleet to near the end of the fleet in one tack.  And some lucked out and had the opposite happen.

We waited a while for the second race after the wind we had seemed to disappear.  We finally got enough wind to start a race, a 4-leg wind-ward-leeward with .35 mile legs.  After the first 6 boats rounded the first windward mark and put up spinnakers, they seemed to stop in their tracks as two boats that did not raise chutes passed them all, one below and one above.  Most boats put their spinnakers up and down quite a few times during this race.

After Day 3, The Championship Leaders are Zeke and Jay Horowitz, Tom and Melissa Miller, and Rod and Roddy Stieffel.  The Challenger leaders are Greg and Diane Kampf, Tom Clark and David Bergevin and Burton Shepherd and Audrey Duffell.  Full Results here.