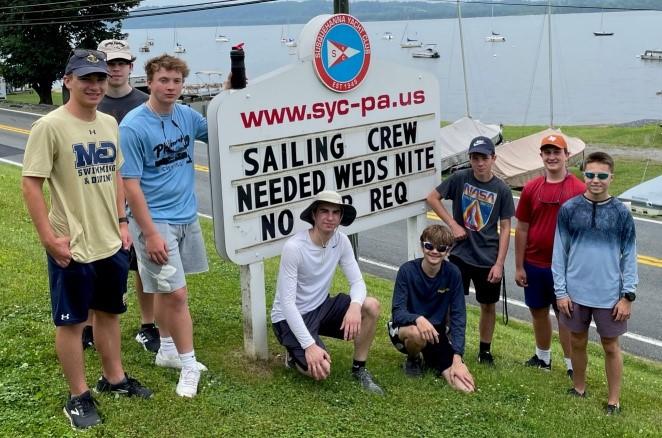 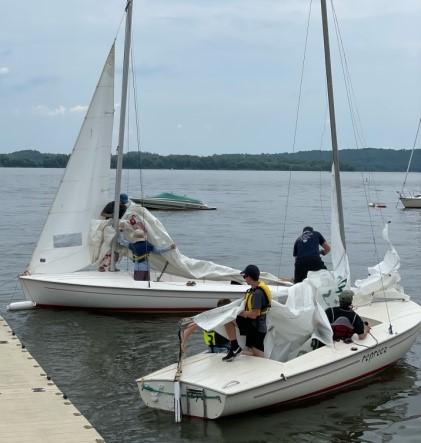 At this writing, a contingent of Boy Scouts and dads have boarded their fifty plus foot sailboat in the US Virgin Islands for a 10 day sailing adventure, known as "Sea Base".  Several of the boys are Eagle Scouts and for some, it is their last Scouting activity, having graduated from high school and 'aged out' of Scouting.

But, just thirty six hours ago, all but two had never been sailing before!  Two had earned their Small Boat Sailing Merit Badge. But, for the rest, getting aboard that vessel in the USVI would have been their first exposure to sailing ... had it not been for Fleet 81 skippers coming to their rescue!

Three Fleet 81 Flying Scot skippers, all members of the Susquehanna Yacht Club, Bob Kilgore, Jon Stepanian and Brian Giersch, volunteered their boats and their time to give the boys and dads an exposure to sailing just thirty six hours before boarding their flight to the USVI.

The group rendezvoused in the Club's open air pavilion, where Giersch provided an orientation to the boats, the river, safety and some fundamentals of sailing.  In advance of the gathering, the participants had been encouraged to view a video clip that provided an orientation to the Flying Scot, its components and how to rig it.  They also were given access to a video of a solo Annapolis sailor getting under way and going through the various points of sail.

They then heading down to the bulkhead to see one Flying Scot up close before actually boarding their assigned boats and heading out on the river.  Each boat was then assigned a 'crew', which, upon boarding, assisted the skipper in hoisting sails and getting underway.

The river was kind to the little flotilla ... thankfully .. as it was the introductory sailing experience for so many of the group.  Winds were averaging 10 knots or less from the west, ensuring calm waters at the bulkhead and floating docks.  It was a challenge to get out of the land's wind shadow and find the breeze out on the river.  But once a few hundred yards out the boys were able to learn each of the crew 'positions' for handing their boat and rotate through them.  Light winds, with occasional puffs, enabled the Scouts to learn to 'see' the wind out on the water and better understand its vagaries

"Weather" had been a concern all morning, with potential showers a threat at almost any time.  As predicted, showers moved across the river to the north of the Club and seemed to be closing in.  So, keeping safety as a primary concern, the crews headed back to the Club docks and hoisted out on to their respective trailers.  Having arrived at the waterfront at the start of the event, with the skippers having already made their boats rigged and ready, the Scouts, on haul out, assisted their respective skippers getting sails off  and bagged, getting gear stowed and boats covered.

They then assembled at the SYC club sign, where they provided photographic evidence of their willingness to serve as volunteer Flying Scot crew, as needed.

The event concluded with Scout Leaders inspecting the 'gear bags' each Scout had assembled for their USVI adventure.  Then it was home for thirty six hours before heading to St. Thomas, USVI, and an adventure of a lifetime.

Each participant not only expressed his enthusiasm for the event, but also thanked the SYC and its Fleet 81 Flying Scot skippers for providing an sailing orientation opportunity before having to face the trade winds and Francis Drake Channel.