Loads of Fun at the 2016 Glow in the Dark Regatta - Clinton Lake, IL 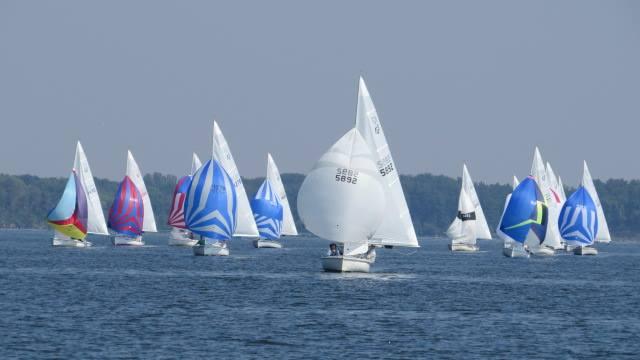 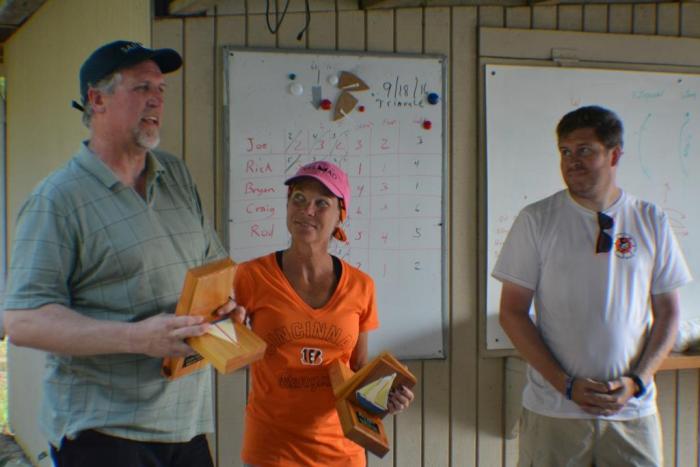 Well, at the risk of tooting my own (really Fleet 135's) horn, I'd say the Glow regatta was pretty much a success. The weather was a little toasty, but still reasonable for camping. We had the very able PRO Dan Goldberg squeeze two races out of the light, north-northeast winds Saturday and then two more great races Sunday when the wind finally arrived from the south.

In Saturday's first race Bill Vogler and Jack McClurkin caught Bruce and Lynn Kitchen, who have been having an outstanding season. In the second race the Kitchens came back and, as the wind died, snuck up the right side of the lake, while Ben and Deb tried the left side, barely missing a few stumps and branches! It was a relief to the whole fleet when the RC shortened the course from five legs to three in dying breeze.

This was the first year we used regatta network for scoring and apparently it was amazing. As soon as Fleet 135-member and scoring chair Trent Johnson got off the water and entered a few numbers, voila! The results were up! This is a far cry from back in the day when we hand wrote results on the white board at the pavilion.  I know not everyone loves registering on line but it sure did make scoring tons easier.

After everyone pulled their boats and started drinking beer we started the steak cookout, with the able assistance of Chris Tesdal. We really need to buy him a chef's hat one of these years. We had the usual amazing beers from Madison courtesy of Deb and Luther Torgerson, as well as many other adult beverage contributions, and chocolate cake to die for from Heather Johnson.

In addition to the fabulous food, we had fantastic entertainment courtesy of Jamie Cash and his wife, Jeannine. It was too dark to take a photo but it was impressive to see everyone happily surrounding Jamie and his keyboard and the bonfire and just mellowing out. Heaven. I really really REALLY hope they come back next year!

Sunday's wind was a little more assertive, which made most people happy. Nothing like having a light wind day to appreciate one with a little more pressure. For those without radios there was some confusion about why the race committee kept setting up and then moving. It turns out there is a semi-mythic underground obstacle somewhere along the shore near where the race committee set up. We urged them to move, which they did. Then, when Bryan Hunt and Tom Yeagle sailed by to check on their placement, WHAM! They hit the darn thing. So the race committee had to pick up and move again, this time farther out into the lake, which necessitated them changing the course from a W4 to a W5. For those who didn't understand what was happening, that added even more confusion when they realized boats were still racing after the fourth leg!

It's a funny thing when you complain for years and years about something and never get bothered enough to fix it. Well, that changed Sunday, and after the awards were done and everyone packed up, a few intrepid club members went out with a sonar device and marked the trouble spot. Was it a ridge? A chimney? The Loch Ness monster on holiday? It's hard to say...

Sunday was Ryan Malmgren and Stacey Rieu's day, with two bullets. The Kitchens hung tough with a second and third place and the overall win for the weekend.  Congratulations Bruce and Lynn!!

We have tons of amazing photos from several different people and we’ll supply links as soon as we can.