Lessons Learned from the 2015 ACC 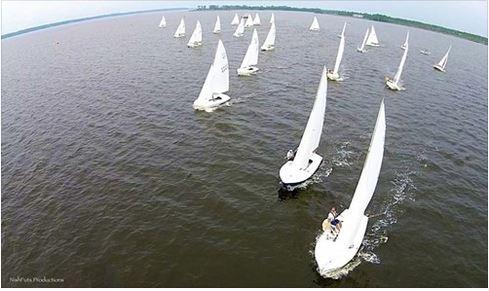 At the Atlantic Coast Championship on the Neuse River in September a fleet of 23 Scots was hit by a microburst with winds going from 12 – 15 knots to 50 – 60 knots in less than a minute and staying  high for 10 + minutes.   Seas quickly built to 3+ feet.  The teams sailing in this championship were well qualified skippers and crews, and yet 20 capsized.  There was extensive property damage including 8 -9 damaged mast, some of which are still on the bottom.  We were fortunate indeed that no one was seriously injured which could have happened very easily.

A few people shared some ideas on shore aimed at avoiding or at least minimizing the risk and damage in such situations.  Such conditions are thankfully rare.  I have been racing sailboats very actively since 1966 and this is the fortunately the worst weather I have encountered.  I emailed all the teams and asked that they share their thoughts on avoiding or managing bad weather in the future.  I will summarize these ideas and suggestions for the benefit of all Scoters.  I received 7 out of 23 entrants plus another from the team that did not launch after reviewing the forecast.  And, they were very capable sailors.

Most admit to realizing that there was a threat in the form of an approaching thunderstorm with steel blue skies in the distance.  See photo. Some saw this as early as the windward mark before the downwind finish about 1 mile toward shore and the well sheltered harbor at Blackbeard Sailing Club.   Most admitted to being caught up in the competition so much that they failed to do an appropriate RISK ANALYSIS and to prioritize steps to minimize the risk.  One team attempted anchoring first, then realized they were not wearing PFDs and killed time getting them on and then getting sails down.  This skipper realized the steps in order should have been PFDs well before this point, sails down then anchor if possible.  Another admits that when the boat to weather was so close that her boom was in their cockpit that he failed to bear away because he would not have been able to lay the finish line even though the wind had already started to build.

One skipper referred to this failure to respond being caused by the FOG of BATTLE.  I personally admit to the same thing even though we were probably battling to stay in the top ten.  I had observed the steel blue clouds a few minutes before with the behind the skyline of New Bern visible about 3 miles away.  When we jibed for the finish only a couple of minutes later New Bern was no longer visible and the storm almost on us.  We managed to get the spinnaker down before being blown over very quickly. The main and jib at first appeared to be luffing but the PRO reported a 180 degree shift as the storm hit making the sails fill quickly and dramatically.  I have never gone over that fast.   I was clearly too caught up in the competition.

Suggestions as a Storm Approaches

After the wind abates

With the photos of all the boats towed in completely swamped it is evident that these step were not used or the ports were lost after being towed. 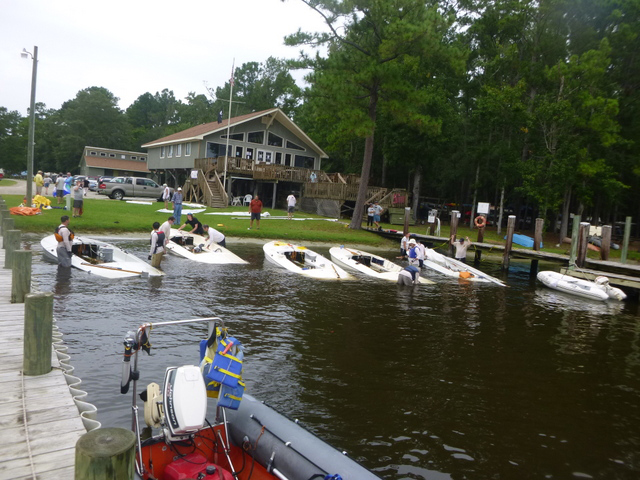 Blackbeard Sailing Club had 6 boats on the water for a fleet of 24 Scots which is enough under ordinary circumstances.  They reacted immediately to the job at hand and seven other power boats came out from the club and nearby Fairfield Harbor marina on hearing the calls on VHF. Rescues were handled very well from the accounts we have heard about and although the equipment suffered a lot the sailors were largely unharmed.

NOTE: PLEASE DO NOT use ¼” stainless steel bolts to attach shrouds to the chain plates.   When it is necessary to separate the mast from the hull, sailors can get a split ring out pretty easily but don’t carry around two 7/16” wrenches with them.  One rescue took almost an hour because of this.

Two Scot sailors that came ashore early went back out to assist with the rescues of their fellow competitors.  Dave Neff actually finished the abandoned race in first place on Scot #5609 and Gabe Hermans who crews with his dad Chris on Scot #4088 righted his boat and Gabe actually jumped on my boat for my tow back in.  Both then jumped on safety boats and stayed out until all were in harbor.  Well done gentlemen.

The forecast for the Saturday race day was for 10 -14 mph with gust to 23.  It was a delightful sailing day.  There were no severe thunderstorm watches in effect and no warnings were issued that afternoon.  I talked with the meteorologist at the NOAA station at Newport, North Carolina which is the closest weather radar southeast of New Bern.  The storm that hit us was traveling perpendicular to their radar beam making their wind estimates less accurate.  The forecast winds at 1000 feet were 40 knots and did not raise concerns about a severe thunderstorm.   As the storm got further from them the radar, accuracy increased and wind estimates of 60 knots prompted them to issue a severe thunderstorm warning for Pamlico and Hyde Counties north east of our location.  Our PRO was watch and listening to the Newport station and could not predict the micro burst/white squall which happened.  In my conversation with the meteorologist micro burst and straight line winds are caused when there is a heavy downpour from a thunderstorm with high winds aloft.   This downpour brings strong winds aloft to the surface at much higher speed than the surface winds.

An excellent description of microburst and the difficulty of predicting them can be found at http://www.erh.noaa.gov/cae/svrwx/downburst.htm

We all looked at the sky and decided to continue racing, and now we all know to be more cautious and better prepared in the future.  Sometimes it’s not if it’s going to hit you but when and how hard.  Be prepared and hope it never happens again.