2015 Battle of the Paddle - Seaside Park and Lavalette YC, NJ 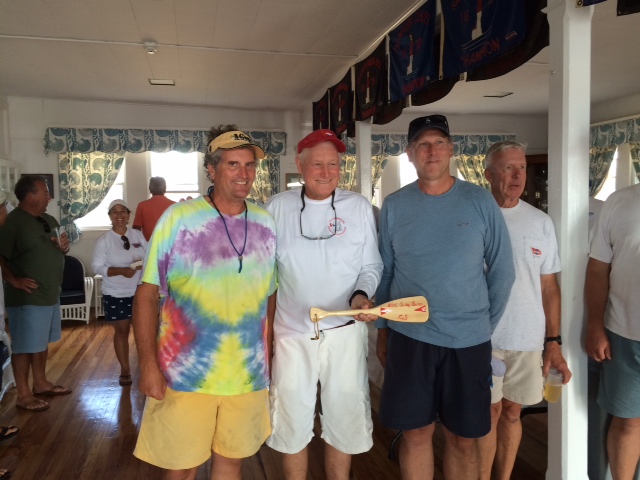 In the parking lot of just about every yacht club on Barnegat Bay in New Jersey sits a number of covered Flying Scots just waiting to unfurl their sails in a perfect breeze.  But the Barnegat Bay Yacht Racing Association can only seem to attract a small percentage of the Scot sailors to the weekly Saturday races that they have been holding for over a century.

As enthusiastic sailors, we all feel disappointment seeing so many Scots sitting under cover instead of on the water.  By an unscientific estimate, there are 40-50 Flying Scots around the bay and on any weekend, we only have 10-15 on the water.   Currently there are three Flying Scot fleets, Toms River YC, Seaside Park YC and Lavallette YC.  Toms River has hosted the NAC’s more than once, and Lavallette has hosted the Atlantic Coast Championships.  Each of these clubs has its own club racing schedule and the Barnagat Bay Yacht Racing Association hosts a 10 week series during the summer where Scots from all clubs participate.  To encourage more participation, this past year Lavallette and Seaside Park agreed to join one another’s fleets for a home and home regatta.   “LYC has 7 or 8 boats out every Sunday and Seaside has 5 or 6.  Combining our fleets for a couple weeks offers sailors both good racing and the comradery of other Scot sailors they might not have the chance to meet,” said Rob Vogel, the SPYC Scot fleet captain.

Lavallette conducts a ten race Sunday series consisting of one long race each Sunday while Seaside holds club races 5 times a summer with 3 short windward-leeward challenges.  With a little planning over the winter, “The Battle of the Paddle” was initiated. The team having the lowest score for the two day series would win a wooden paddle trophy to proudly display in their club.

On Sunday, July 19th, Peter Sayia towed four Scots and a crowd of sailors and supporters from Seaside Park to the waters off Lavallette.  “The tow is often the best part of the day where morning chatter is about wind speed, forecasts and catching up on the gossip of the week “ observed Sayia. “While the tow home is filled with recounting minute by minute of the day’s races.” After a tasty lunch all sailors rigged their boats and proceeded to the starting area where winds were Southeast at 9-11 mph. At 2:05 PM the start gun sounded and the race was on.  Peter Sayia quickly grabbed the lead and was never threatened on the 9 leg windward/leeward course.  The next three spots went to LYC boats - Ron Kiss, Dave Lambie and Roy Childers respectively.  A view of the LYC start from the Signal Boat is shown below. 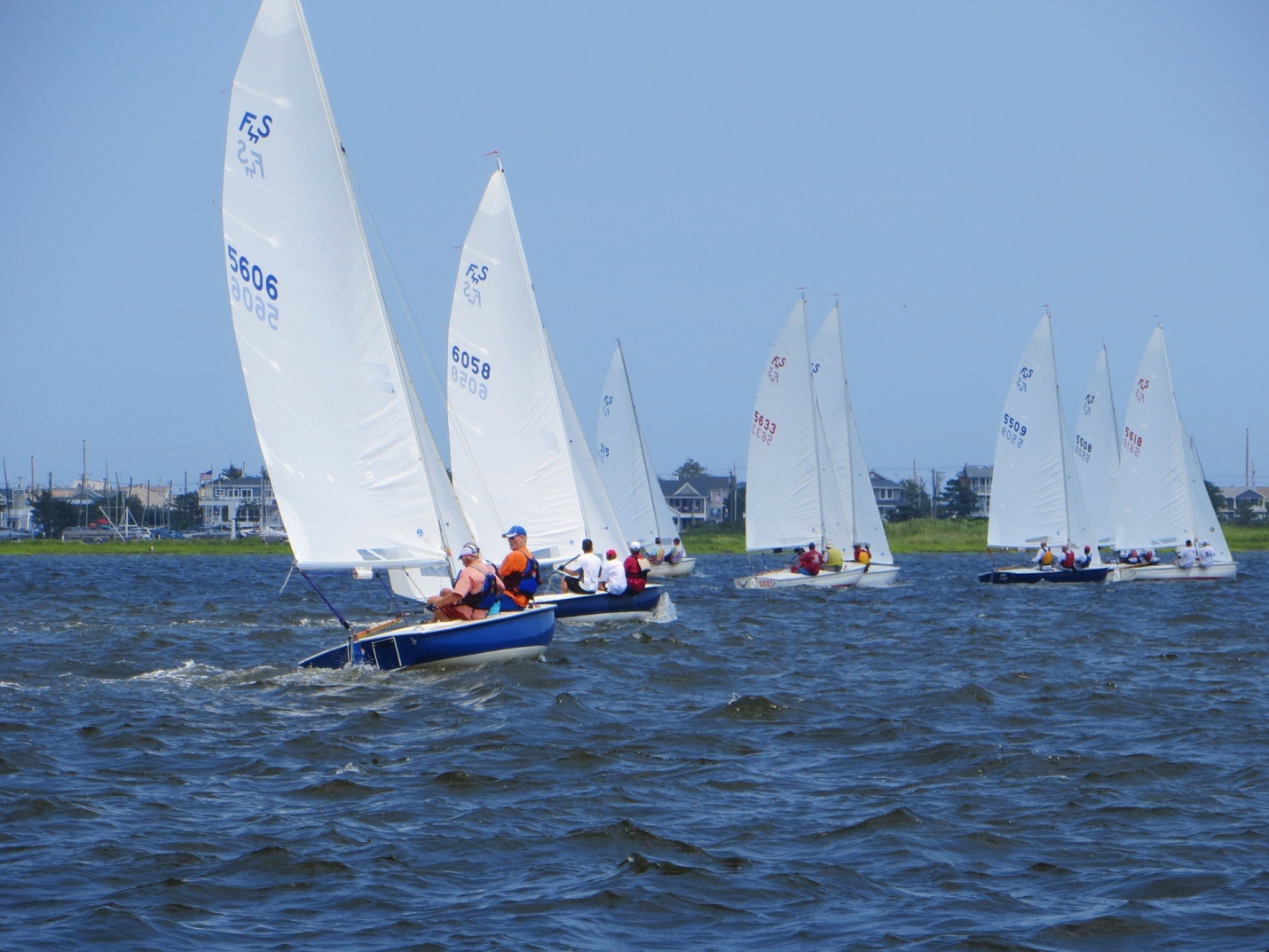 After racing, all competitors enjoyed a nice reception and awards ceremony on the deck at Lavallette Yacht Club. “All clubs are proud of their traditions and we were thrilled to have the opportunity to display our hospitality to our fellow Scot Sailors from Seaside Park”, remarked Roy Childers from LYC.

Three weeks later, two power boats towed five LYC Scots to Seaside Park to complete the Battle for the Paddle.  After an equally excellent lunch hosted by the SPYC Junior Sailing Grill the combined fleet of 11 boats headed to the starting area for the first of three short races.  A Northeast breeze of 7-8 mph greeted the fleet at a crowded starting line and the sailors were aggressive.  On a short course, the first rounding of the windward mark can be more meaningful than the start, where an inside position and clean rounding can mean the race.  Roy Childers of LYC didn’t have a great location at the start, but he had clear air and managed to round the windward mark in first and held that position the entire race.  The second race included a general recall, followed by Ron Kiss being over early in the second start.  Kiss made a recovery following Dave Lambie of LYC to the right where they recovered the fleet and ultimately finished 1,2.  In the third race, Kiss started better than the prior two and slowly moved up to pass Childers and Lambie on the last spinnaker leg.  He held them off to take first. 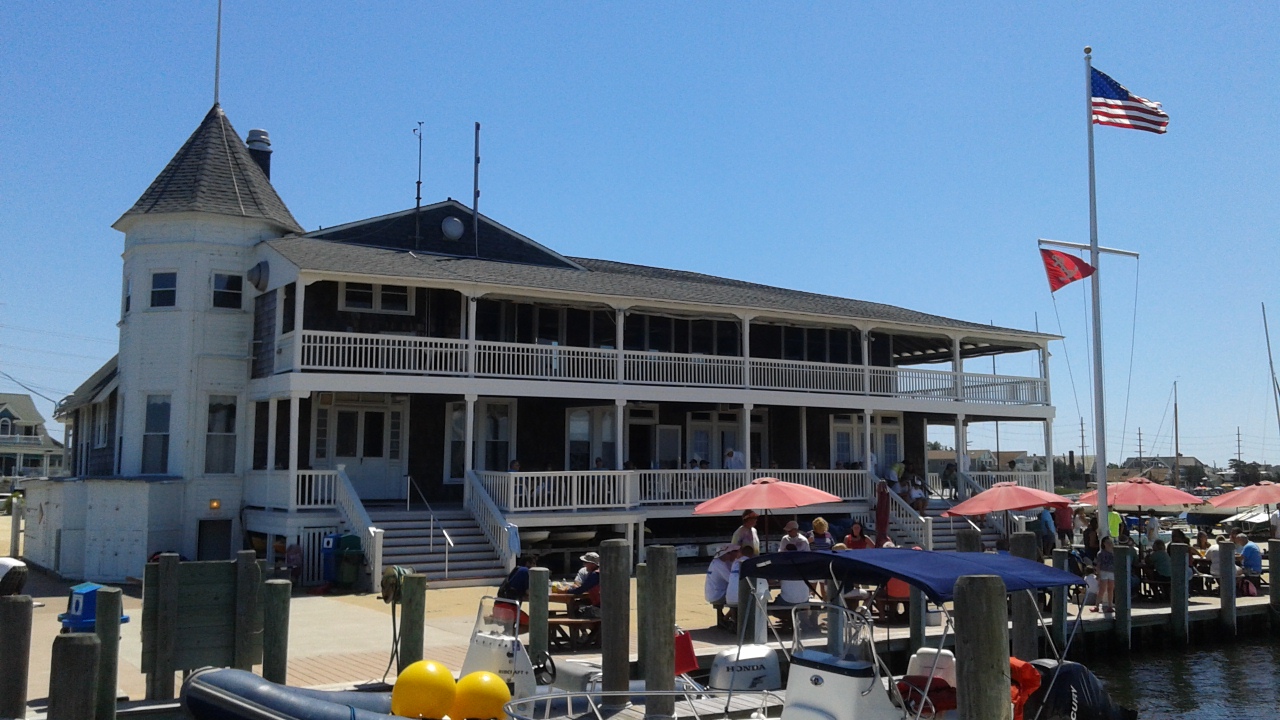 Back at the dock, the sailors were welcomed by SPYC with a spread of hors d'oeuvres and pitchers of beer.  The results were tallied and the winner of the 2015 Battle of the Paddle was LYC.  The series was so well received by the sailors that planning for next year is already underway.  “There’s no doubt this will be become an annual tradition,” observed Childers.  It’s a small step to get some more Scots “on” Water.

More pictures are attached below,  Full results can be found here.