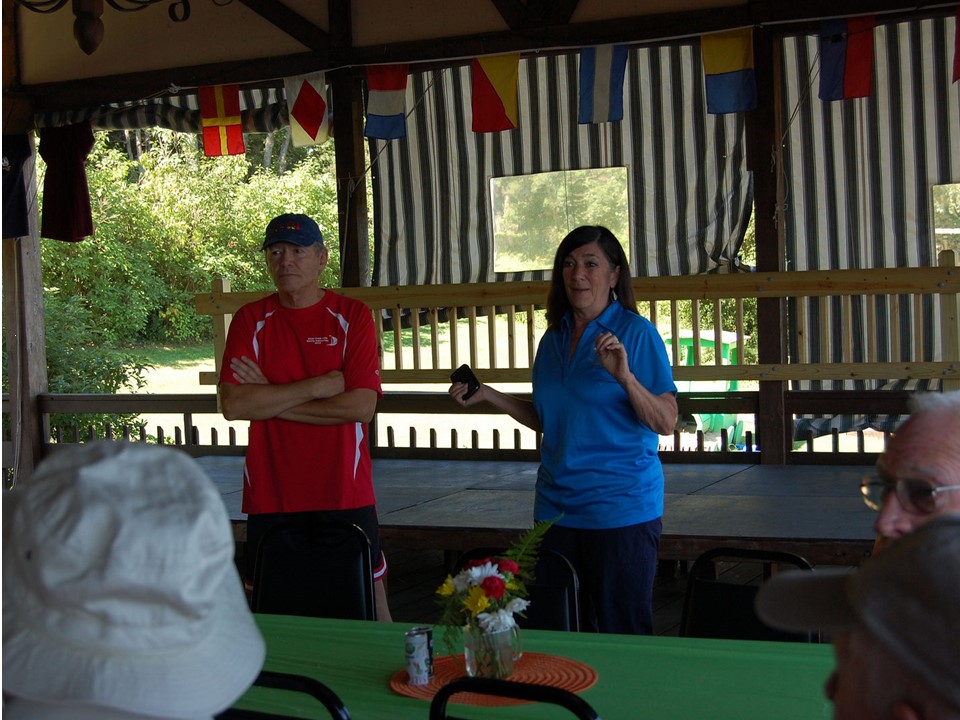 Tucked into the mountains of western Maryland is a very scenic area known as Garrett County.  It was the longtime home of Sandy Douglass, designer and builder of the Flying Scot.  The town of Deer Park is the home of Flying Scot, Incorporated, the company where Scots are manufactured.  Two miles away is a body of water known as Deep Creek Lake, where the 21st annual Sandy Douglass Memorial Regatta was held on July 25 and 26, 2015.

A welcoming Burrito Bash was held at the Deep Creek Yacht Club at Turkey Neck on Friday night to meet and greet out-of-towners and trade stories of past regattas.  The Deep Creek Yacht Racing Association (DCYRA), comprised of the two Deep Creek yacht clubs, is known for hosting and housing visiting sailors and such was the case this weekend.

The Sandy Douglass Memorial Regatta is the biggest sailing event of our season.  A total of 51 Flying Scots registered for the Regatta and we welcomed off-lake sailors from Connecticut, Pennsylvania, Virginia, Ohio and other locations.  Sailors were divided into the typical Gold, Silver, Masters and Challenger fleets and prepped for racing on Saturday and Sunday.  Although the weather Tuesday through Friday was ideal for sailing, Mother Nature had different plans on Saturday, and after three hours, the PRO, Don Griffin, postponed and then cancelled the races for the day due to zero wind.  In spite of this, the Vice Commodore of the Turkey Neck club and his wife, John and Lisa Meredith, prepared a delicious dinner and everyone enjoyed an evening of music and dancing on Saturday night.  After all, it is not a regatta without a party!   Later that night, Regatta Co-Chair, Doc Templeton and member Frank Vandall performed a “wind dance” on the yacht club’s dock to stir up Mother Nature for some wind on Sunday. 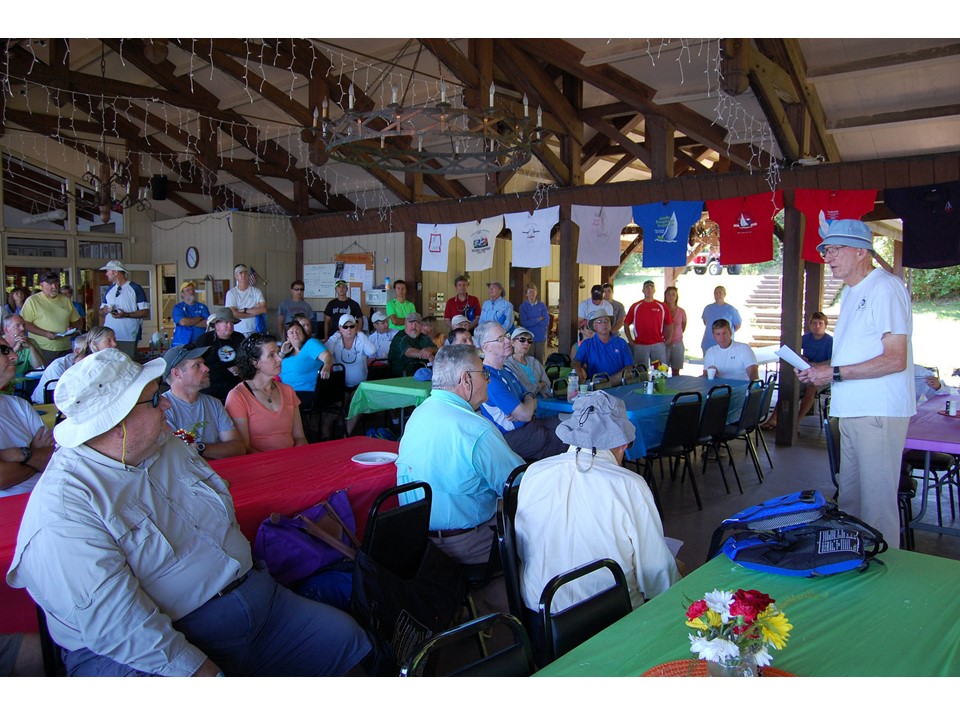 Don Griffin, PRO for the Regatta

Sunday was slightly better with very light winds allowing for an on time start at 10:00 am.  By starting time, 12 boats had registered for the Challenger fleet, promising an exciting race. The advantage was to the sailors who were adept at low-wind sailing, and there were many.  From the start, the fleet divided, one half heading down the right side of the lake, the other to the left. The right side seemed slightly more favored so at the end of the first leg there was a 20 boat gap between the lead boat of Rob Gerlach and Doc Templeton and the rest of the fleet. Going downwind was a different story. The boats that chose a course down the center of the lake managed to the keep their spinnakers full and met the front of the Challenger fleet and the Masters fleet stalled at the leeward mark. Skipper Mary Tran saw an opening at the mark and eased her boat around the inside taking the lead. The run to the finish line was very slow with the wind virtually at zero. However Mary and her crew Lindley Burnham kept their boat moving forward and successfully took first place. 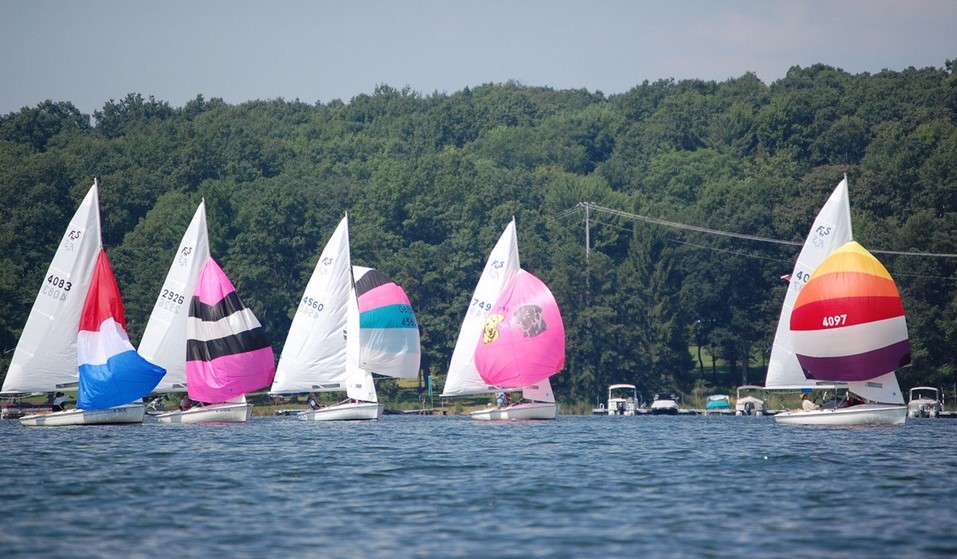 The action in the Masters Fleet was similar to the other fleets’ experiences:  waiting patiently for the wind.  Being adept at passing time, some of these senior sailors may have packed their crossword puzzle or Sudoku books.  But the Masters’ race outcome was not just a matter of being in a lucky spot when the wind came up:  it turned on classic racing tactics.  Dick Gregory led the fleet going into the leeward mark, only to find himself blanketed in a crowd of Silver Fleeters.  Frank Meehan used this opportunity to slide past the mark with a clean rounding into clear air, and he and crew Conrad Lundeen finished at the head of the class; Gregory had to settle for second.

The Silver Fleet had 12 Scots start the race in light variable winds.  Most competitors described the wind conditions as “squirrely”.  Squirrely conditions are not unusual for Deep Creek Lake and these conditions favor local sailors.  However, off-lake skipper, Jay Buhl, and crew, Mike Karn, connected with the changing wind conditions and placed 1st in the Silver Fleet.  They also passed most of the Gold Fleet, which had a 5-minute head start (6th place overall!).  This was quite an accomplishment.  As soon as Jay and Mike crossed the finish line, the wind died.  The rest of the fleet had to be patient and work hard to complete the race and cross the finish line.  Local sailors, Emily Meehan and David Meehan finished 2nd; Ellen Tran and Seth finished 3rd; and Greg Shafer and Tara Shafer finished 4th in the Silver Fleet.

After being skunked by the wind on Saturday, the Gold Fleet was anxious to get out on the water for a race on Sunday. There was just enough to get them to the starting area a few minutes before the scheduled 10 am start. Not all the Gold Fleet boats were able to get to the line before the start, but time was of the essence if they were to get in a couple of races before the 1:30 pm cut off. The wind had shifted left making the pin end of the line heavily favored. The majority of the fleet tacked to port immediately. Joni Palmer and Ray Gauthier had blazing speed in the light air and moved out to an early lead. They split with the fleet and went hard to the left side on the early part of the first leg. The other lead boats stayed more to the right, but Joni’s strategy paid off with an early lead that kept growing. The top five boats were pretty tightly grouped with a big gap to the next group.  The top five finished within a few minutes of each other with only a few feet between 2nd and 4th.  Joni was first, followed by Bruce Spinnenweber second, John Meredith third, Harry Carpenter fourth and Daryl Van Hutton fifth. Bruce managed to finish second despite having fallen out of the boat only a few feet from the finish, but it is important to note he had perfect form using the pike position and near perfect vertical entry. The race committee decided to call it a day with just one race, but there were few complaints from the sun baked sailors. Hats off to the Regatta committee for a fun event despite the lack of wind. 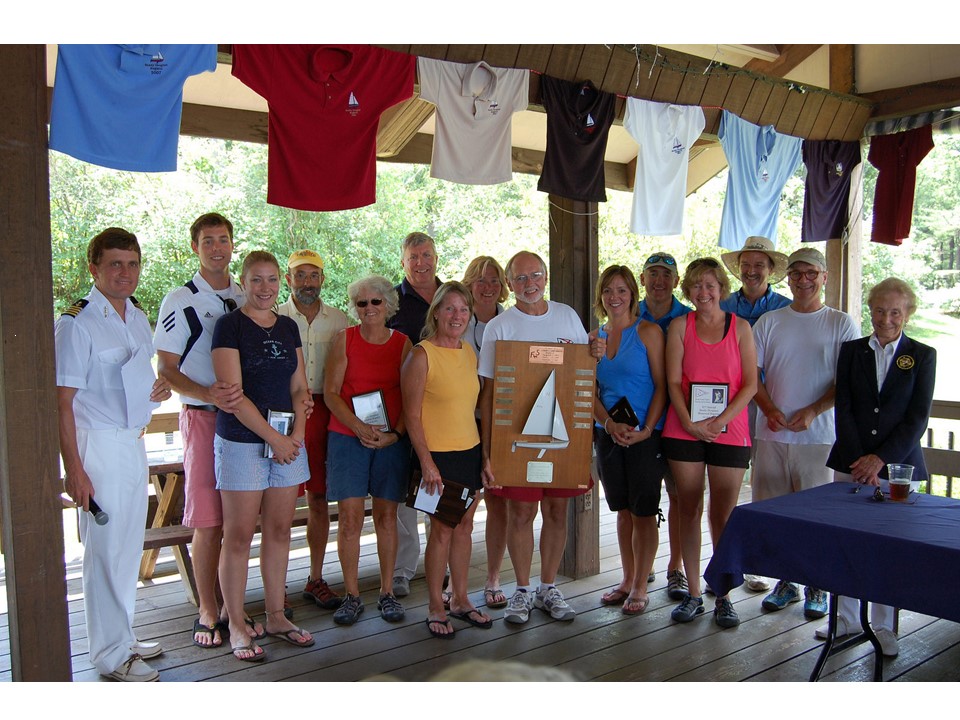 At the awards ceremony, Doc and Judy Templeton, co-chairs of the Regatta and Barbara Griffin, President of the DCYRA thanked everyone who was involved in the success of the Regatta.  The forty-plus year-old perpetual trophy, “the monkey”, went to the Gold Fleet’s 8th-place winner, Jon Skoog and his crew Frank Vandall.  Jon and Frank join an impressive list of past sailors including several past national champions to have won the trophy.  This prize may predict good times ahead for skipper and crew.

While weather was not the best for sailboat racing, this year’s Regatta was still enjoyed by everyone.  We look forward to favorable winds and everyone joining us again next year for the 22nd Annual Sandy Douglass Memorial Regatta.  Thank you sailors and volunteers for a great weekend!