Sandy Douglass Inducted Into the National Sailing Hall of Fame 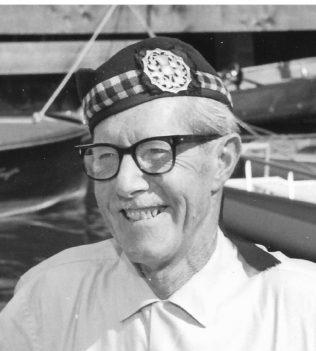 Awesome news! On June 23, 2020, our designer, Gordon K. "Sandy" Douglass was inducted to the National Sailing Hall of Fame. This is quite an honor for Sandy and for our class!. We owe our thanks to Debbie Cycotte, our Class Historian, for her tireless efforts over the last few years to nominate Sandy and help make this happen. For more information visit their website at https://nshof.org/hall-of-fame/

"Affordable Boats Anyone Can Sail"

Inspiration at a young age comes from mentors who can have a major impact on a person’s career. Sandy Douglass was the son of a sailing canoe enthusiast and an avid disciple of the British racer and designer Uffa Fox. In 1915 the senior Douglass was a top sailing canoe racer who competed in regattas on Long Island Sound and on the St. Lawrence River. Young Sandy was intrigued and learned to race sailing canoes and ice boats. After graduating from Dartmouth College in 1926 he met the legendary Uffa Fox at a regatta. Douglass described his admiration for Fox in an article written in 1933 after the International Challenge Cup, “I have no hesitation in naming him my most unforgettable character: boat designer, racing skipper, writer, wit, raconteur, singer and friend.” Douglass was also a good athlete which helped his sailing. During the Depression years he started a boat building company in 1938 that made sailing canoes, International 14s (an Uffa Fox creation), Stars, and Interlakes. These were lean years especially during World War II. Douglass worked as a shipbuilder during this period. Soon after the war ended, he designed a new 17- foot open cockpit planing dinghy and named it the Thistle. Douglass was proud of his Scottish heritage and named his subsequent one designs the Highlander (1949) and the Flying Scott (1958).

The Thistle Class newsletter was conveniently named the “Bagpipe.” Many of the newsletters are on the Class website and make for interesting reading about the enthusiasm for sailing as Americans started to gain modest prosperity for buying boats and earning leisure time after the dark days of the 1930s and 1940s. It seemed every regatta included some kind of social affair after racing. Dinners were priced at $3 per person and the Annual Dues were $3 for the owner and $1 for crews. In 1971, a new boat, sails and trailer was priced around $2,500, which was considered good value since the boats were well built and would be competitive for many years. Throughout the early years of his boat building Sandy Douglass shifted from wood to fiberglass and pioneered advances in construction techniques in the process.

All three classes have stood the test of time and are actively raced throughout North America. The concept was to create affordable, small one designs to be raced by families. To help build up the classes, Douglass raced regularly and was often at the front of the fleet. His racing was impressive and included winning the Thistle National Championship five times, the Flying Scott North American Championship seven times and the North American International Ten Meter Sailing Canoe Championship five times. His wife Mary (1907-2005) was a regular crew with Sandy for over 30 years. Writing about the Thistle, Douglass noted, “Thistle would be light and graceful – how she would slip along in the lightest airs leaving hardly a ripple on the water, sail-ing right through the entire fleet.” You can just image how he got his boat rolling in light wind and found a way to take the lead.