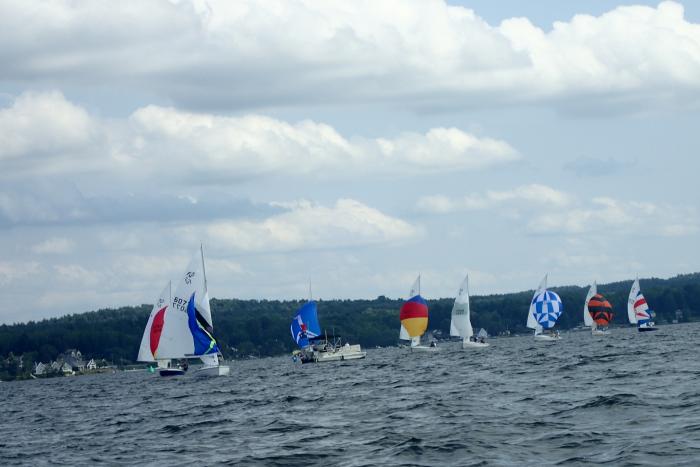 Another wonderful Saratoga Flying Scot Invitational is in the books.  We had two great days of racing and loads of fun visiting with old friends and new friends.  We had beautiful weather in the high 70's and mostly light air both days.  But we had enough wind to get in 4 races on Saturday and 2 on Sunday (one less race for the Challengers), with a mixture of Windward-Leeward and Triangle courses, keeping the divisions on different courses in each race.  The winds were a bit shifty and the race committee had their hands full keeping the races going and keeping the courses as straight as they could - not easy when you need to move the marks and the other division is still sailing the course.  We always appreciate what it takes to run races with multiple fleets. The results from Saturday were completely changed on Sunday, with Saturday's ties for 1st and 3rd in Championship and 1st in Challenger getting resolved on Sunday.  As we all know, lake sailing keeps you guessing and sometimes it does involve a bit of luck - your results may vary!

And the food - pancakes Saturday, French Toast Sunday, the you make it, you bag it you bring it lunches, and the beef and taco dinner on Saturday - delicious as always!  You are sure to have gained a few pounds over this weekend!  Oh, and we did have the usual Saturday thunderstorm at Saratoga, this time a little less dramatic than last year with no huge floods and no close lightning strikes, but one tent was upended and collapsed in the storm!  And the rainbow afterwards was lovely!