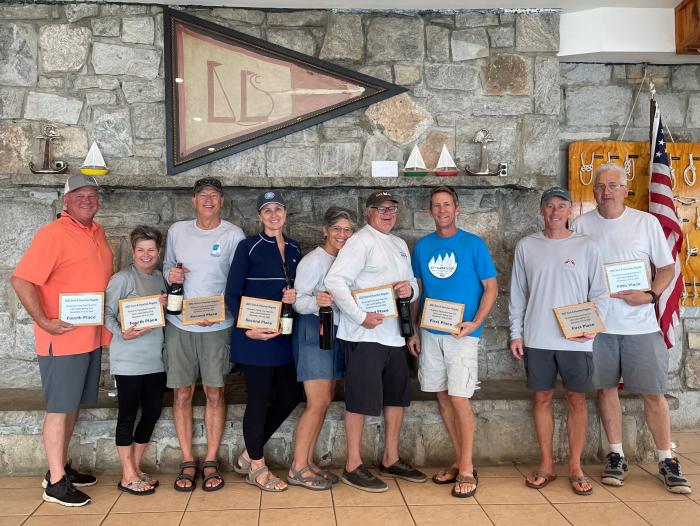 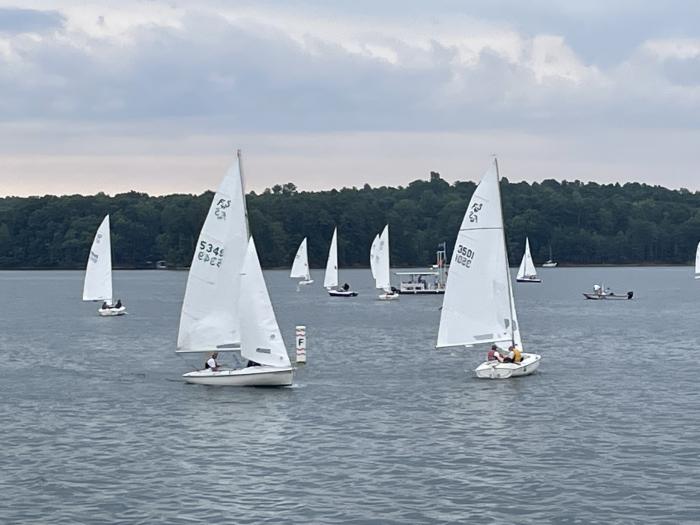 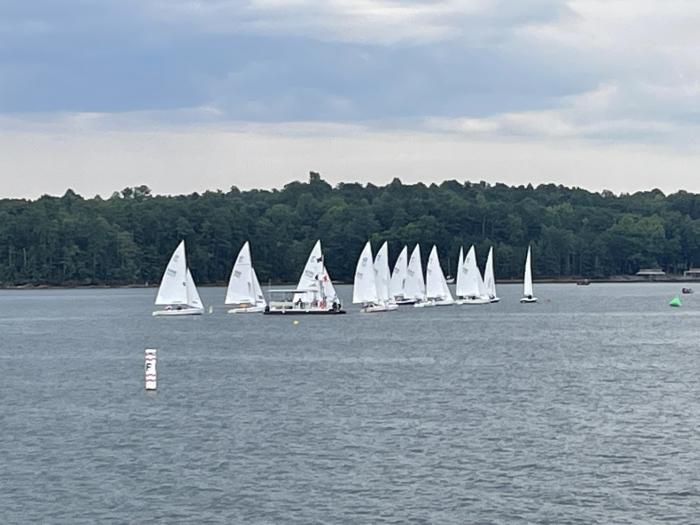 Lake Lanier Sailing Club Flying Scot Fleet 111 held its 9th Scot-A-Hoochee regatta on Sept 24 and 25, 2022. (Lake Lanier is an Army Corps impoundment of the Chattahoochee River, hence the name for the regatta.). Fifteen Scots were registered and the 14 that sailed were on the starting line Saturday hailing from five states (GA, TN, AL, SC and NC). Ben Williams and Deb Aaronson (FS6144) traveled the farthest, from Eastern North Carolina, for their first-time sailing in the Scot-A-Hoochee.

Saturday the forecasters called for 0-5 mph winds from the Northeast. Unfortunately, they got wind speed correct. After a 30-minute postponement ashore, 14 Scots hit the starting line on the large bay south of the club. Despite being the first weekend of Fall sailing conditions were more like summer but with less humidity! Principal Race Official Lee Estes ran one 1-lap and then two 2-lap races in the light, shifty northly breeze. The pin end was favored for all three starts and good starts were the key to success for these races.

Special mention goes to LLSC’s Richard Grayson (FS4931) who sailed with his two young boys the entire afternoon. At the end of the day, Richard mentioned that his youngest son went “below” for a two-hour nap during the racing – a real testament to the versality of the Flying Scot design!

Sailing conditions improved Sunday morning. Sailors were treated to a steady 5-10 knot westerly breeze, racing two 2-lap and a final 2½ lap race in the bay with ¾ mile length legs.  Upwind sailors had to choose between more pressure on the left or playing the lifts off the point of land on right but often less pressure. The pressure left paid off in two of the three races.

Dave Rink and crew Joel Blade (FS6125) demonstrated consistent boat speed and tactics winning the regatta and throwing out a high score of “2”. Lynn and Bill (crew) Bruss (FS6158) were 2nd throwing out a high score of “4”, and Ben Williams and Deb Aaronson were 3rd for the regatta. A rare Scot-A-Hoochee protest was expertly resolved with a handshake and no penalties.

Please join us next September (date pending) for our 10th Scot-A-Hootchee Regatta 50 years after Fleet 111’s initial charter. Out of town Scot-A-Hoochee regatta sailors heading to the Wife-Husband Championship Sept 29-Oct 1, 2023 at Birmingham Sailing Club (BSC) can make arrangements to leave their boats at LLSC for the weeks prior the BSC Regatta.

Special thanks go to the Fleet 111 Captain Bill Harshman for organizing the regatta, the out of town sailors for traveling, PRO Lee Estes and his RC crew, Laura Howard for serving as support crew on Saturday, Bruce and Jackie Cattanach for their famous drawing, and to Coral Reef Sailing Apparel, Mad Sails, Quantum Sails, North Sails, and Schurr Sails for their generous donations.