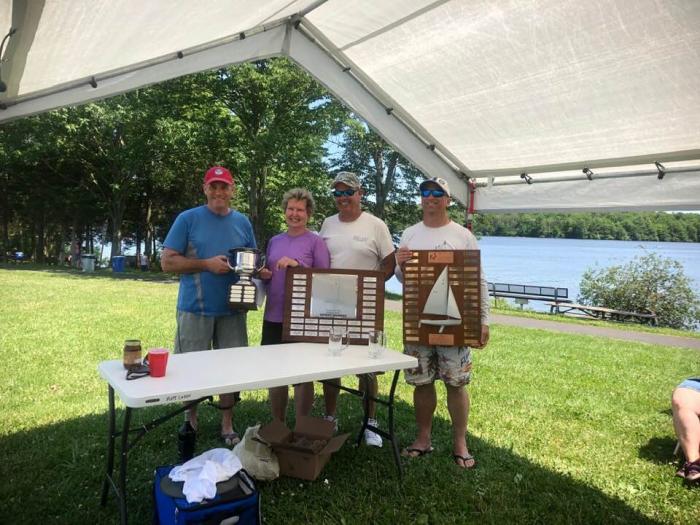 Do you know about the gem called Lake Nockamixon in Quakertown, PA? Well, there's another gem named Nockamixon Sail Club, home of Fleet 163, This fleet puts on a great regatta without a building, using tents and borrowed tables, but you would never know it - they just DO it!. The fleet males it look effortless to help everyone rig, launch, retrieve and pack up their boats.The racing area is less than a mile from the dock so it only takes a few minutes to get out to the course. The entire fleet just makes you feel at home and it's such a relaxing place to be.

This year's Glenn Wesley Memorial was also the Greater New York District Championship held on June 22-23, 2019. With 10 boats in Championship and 4 boats in Challenger, RC Chairs Warren Manganese and Craig Tourtellott did a great job of race managmenet, setting up great courses and managing the 2 fleets. Saturday brought us 12-15 MPH winds, sometimes gusting into the 20s and very shifty. Two boats capsized in the gusts but luckily no one was hurt. Sunday it was more like 7-10 with some gusts and a bit shifty, but certainly easier than Saturday. We had 1 triangle course and 4 Windward Leeward courses over the 2 days, with the races lasting about 40 minutes each. It was competitive out there and loads of fun! Saturday night we had a great barbecue dinner at the Quakertown Train Station!  What a fun place and the food was wonderful too, much of it being prepared by club members.

After a hard fouhgt regatta, the top 3 in Championship were (1) Dan Vought and David Watss, also Greater NY District Champions, (2) Marc Gordon and Phil Cardelfe and (3) Matt Cohen and Greg Morrison. The top 3 in Challenger were Per Iverson and Rick Wekheiser, (2) John Welden and Patrick De Maynadier and (3) Stephen Peters with Alison Deforge, Brian Deforge, and Rita Petres

Photos from Saturday by Arthur Petrosemolo are here.

Thanks again to Phil and Jill Scheetz, Rick and Betsy Baucom, Dorothy Wesley and the rest of their crew for everything! We'll be back!