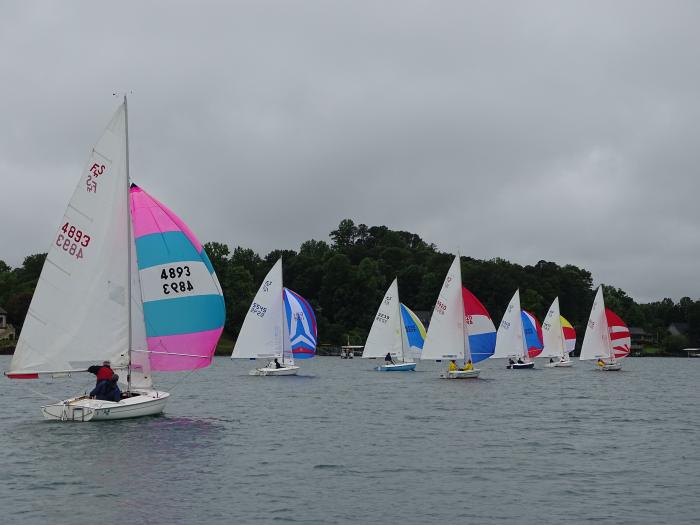 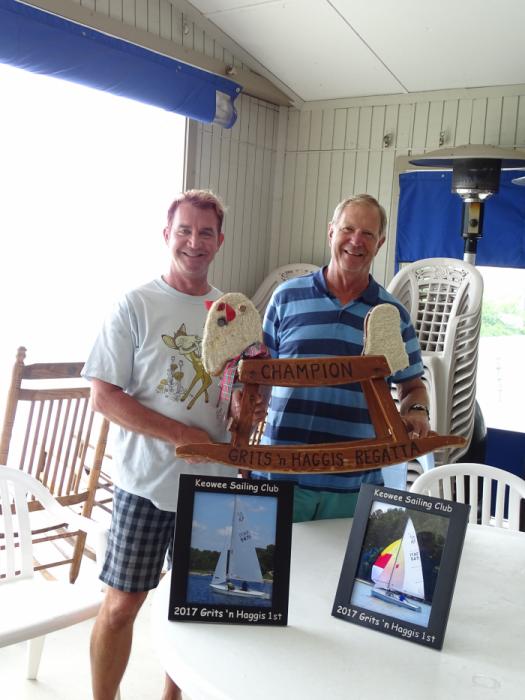 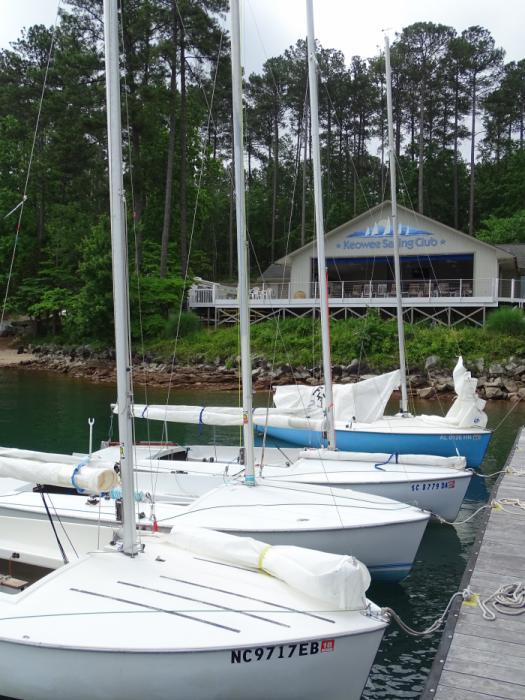 Despite a very iffy weekend weather forecast, 19 Flying Scot crews attended the 2017 Grits and Haggis Regatta on beautiful Lake Keowee, in the Blue Ridge foothills of South Carolina, on Saturday, May 20 and Sunday, May 21.

But Keowee was not very beautiful for this year's event. In Saturday's hot and very muggy first race, Richard Wade and super crew Jim Leonard had an OCS start in near drifter conditions, then restarted, caught up to the leading group by the end of the first leg, but then drifted into the weather mark, yet somehow managed to come all the way back to record an impressive third place finish. They then won Saturday's very light air second race by several boat lengths to lead the regatta at that point. First race winners Don Smith and Chris Kacinski from Lake Norman followed their win with a third place finish in Saturday's second race to stand second on the day. Locals Sandy and Keith Eustis, with a fourth and a second, and Barry and Tracy Hambrick, from Birmingham, AL, with a second and a fifth, were close behind, and the fleet made it home before the rains began.

Saturday evening featured dark 'n stormies for all, a cut-and-grill-your-own sirloin steak dinner, and the “Fleet 193 Olympics” as evening entertainment. The Olympics included a thrilling game of “Pin the Blame on the PRO”, as well as “Boat Number Bingo” and a golf ball roll on a gravel drive to “Win the Starting Line.” Among the delicacies provided by an overthe-top food committee were a dark 'n stormy cake, both non-alcoholic and rum laced bread
puddings, and a platter of genuine Scotch eggs.

Sunday morning dawned to a steady downpour during our signature Grits and Haggis breakfast. Food Captain Cheiko French's famous Haggis cassarole recipe includes only a small amount of Haggis (oh thank you, Cheiko!), which went nicely with the scrambled eggs, South Carolina grits, and various other dishes. About half the fleet, including Smith/Kacinski and Sam Secrest/Sharon Hamilton who stood fifth after Satureday's races, then decided to
not go out for Sunday racing. Some of these competitors just didn't want to sail in a steady rain, while other simply had waaaay to much to eat at breakfast.  Sunday's racing included two more races in a relatively steady 5-7 mph breeze with diminishing rain; it even stopped raining altogether about halfway through the final race. Wade/Leonard won both Sunday races by 5-10 boat lengths each, while the Eustises and the Hambricks both recorded two more top finishes apiece to take 2nd and 3rd overall respectively. John Kreidler and junior crew Mitchell Brannon from nearby Lake Hartwell scored a second and a fith on Sunday to get back into 4th place overall, while Fleet 193's Fleet Captain Bob Graves, with Roger Sulhoff as his crew, managed to recover from a disastrous 18th place finish in race #2 on Saturday to take 5th overall in the final standings. We look forward to seeing all of you here for more Southern hospitality and much better racing conditions in 2018.

If you want to view two short but excellent drone video programs by Wilson Jenkins of the Muscle Shoals, Al, Flying Scot fleet, OR if you want to browse the complete set of over 600 downloadable pictures taken by KSC member Liz Keenan, you can visit the Keowee Sailing Club's website at http://www.keoweesailingclub.com.  Just click on the regatta story posted there.