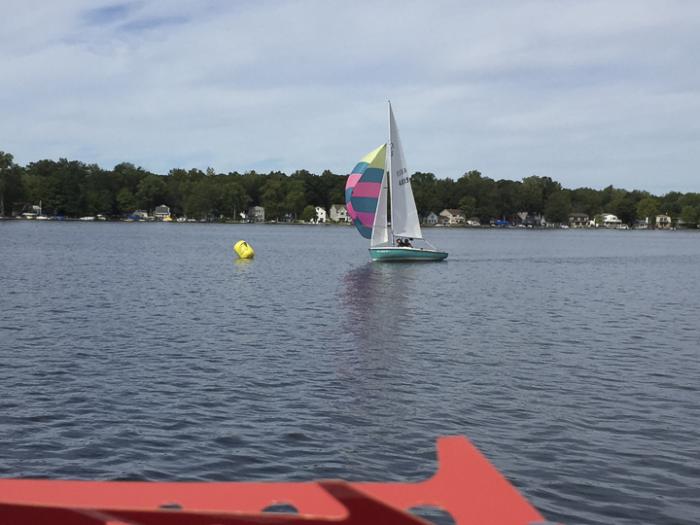 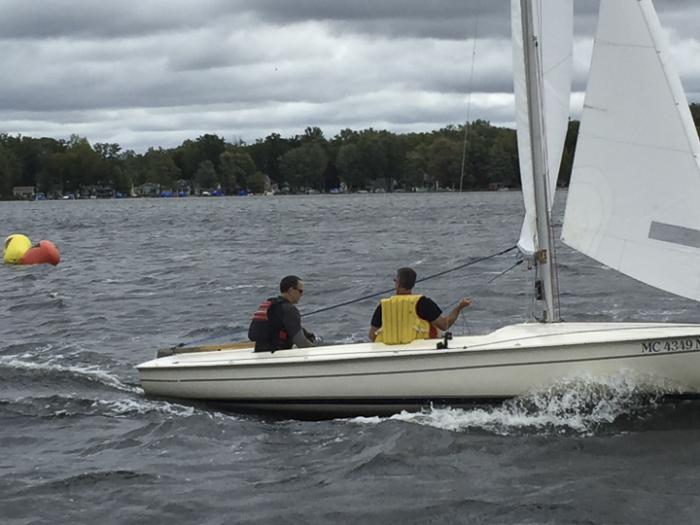 Portage Yacht Club and Fleet 20 hosted the Michigan-Ontario Districts this year and part of the annual Michigan Hot Scot Regatta.  8 boats competed for the Fanshawe Trophy.  Included in the race was our new District Governor, Steve Rajkovich.

As is often the case at Portage Lake the wind was going to be an issue.  A cold front was expected and for Saturday the wind was expected to be 15-21mph with gusts to 30.  Sunday was another story… winds calm to 3mph.

Saturday Morning started off with coffee and registration in the PYC club house and a lot of activity in the parking lot and the docks as folks readied their boats.  There was also a lot of sharing of information gleaned from various phone apps as sailors tried to figure out whether the wind was going to stay within safe limits.  Portage is a small, inland lake with a reputation for very shifty winds.

At the Skippers’ meeting discussion about the wind continued as safe sailing was discussed.  The Regatta was planned to consist of five races and the race team intended to do just that.  Steve Rajkovich took the opportunity to introduce himself as Governor and to publicly thank Bill Pfund for serving as governor for the last 6 years.

Folks “saddled up” and headed out to the course for he first race.  Winds held steady at 16 MPH with moderate gusts and the race was closely contested.  At the finish the fleet returned to PYC for lunch.  Skippers and crew were asked about going back out and it was decided that the prospects of little to no wind on Sunday persuaded a majority to try one or two more races while the wind held.

The excellent race management team managed to get off two more very challenging races before the front came through. Lots of sudden wind shifts, hiking, and hard work on the part of each team.

Beer and Brats were the order of the day for the after race cook-out held under the tent in the PYC park.  A few bangs and burses from the sailing, mostly crew, and the usual complaints of how easy the skippers have it in the back of the boat.  The scores at the end of the first day were very close among those that sailed all three races with a tie for second. 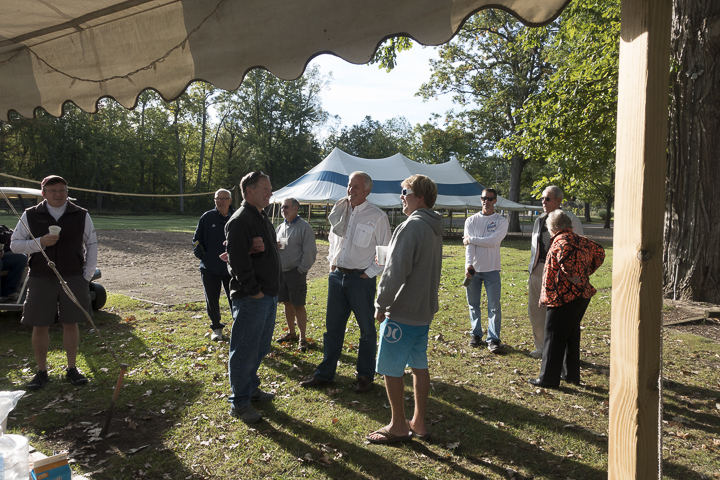 The coffee was on at 0830 for our second day of racing (Sunday) but the wind certainly was not!  The lake was a mirror and the reports from various phone apps was not encouraging.  So sailors gathered under the tent and partook of coffee and pastries while they waited.

The race management team headed out at 1000 with the aim of getting a 1030 start for at least one race.  They waited until a light north wind filled in to send out the fleet.

At the start, Forest Rogers and crew Andy Nixon won the pin end start with the fleet heading up in two groups of four boats.  Steve Rajkovich and crew Phil Hertzler tacked across the second starboard group not long after the start, picked up new wind in the center of the course on port, then tacked back to starboard on the lifted wind to establish a dominant lead at the first windward mark.  There was just enough wind to fill spinnakers with Steve and Phil out in front pursued by the fleet.  The light wind crowded the fleet around the first leeward mark, which made for lots of vocal .  Despite a strong challenge by Michael Ehnis and crew Jerry Best, Steve and Phil won the four legged, downwind finish.

The last race was an equal challenge, but after some delay on the water it was sailed as well.

Before entering into the last race Michael and Jerry were in first place and hoping the wind would die completely and head in for pizza.  However, after some patience by the Race Committee, the fifth and last was sailed as well.  An equally changeling race with a crowded start and a 90 degree wind shift, the race was won by Brian and Suzy Hawkins followed by Forest and Andy and then Fritz Wagner and Jake Bach.  Each of the leaders took advantage of the shift to the right of the course on the first leg.